Below are the official NYSSRA Nordic Points Scoring Rules beginning in the 2012-13 ski season-Updated for 2018-19:

All skiers will score NYSSRA-Nordic points for each race of the NYSSRA-Nordic Series that they complete. Designated events are listed in the cross-country race schedule at www.nyssranordic.org. Earned points will be awarded using the formula and tables below, and will accumulate over the course of a given season.

Junior Female (U16 and younger)

Junior Male (U16 and younger)

*in a case where an event allows skiers to participate in varying distances, each distance will be sorted into the above groups.

Age class placing: Each racer is awarded points based on placing within their respective age class. 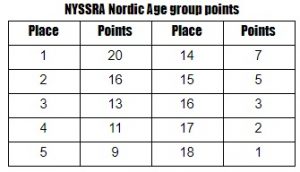 Overall Placing: Racers will be awarded points for finishing in the top 10 of a given event 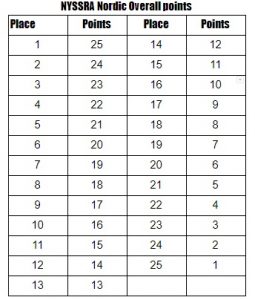 NOTE: All points are doubled for the NYSSRA Champions Cup Race

To encourage participation by individuals in NYSSRA-Nordic sanctioned events, NYSSRA Nordic sponsors a season-long points series. Races must be sanctioned by a sanctioned club/organization with NYSSRA  before the season {some special consideration for weather related issues can be given}. For late sanctioned or early season races, at least a week’s notice is required to get sanctioned. Unsanctioned events are not part of the NYSSRA Points series.

Racers of all age classes will score points during sanctioned races, with those accumulating the most points in each age group over the course of the season will win points series awards, and be officially recognized as NYSSRA-Nordic’s New York State Nordic skiing points series champions.

Racers’ points are totaled after each race, and accumulate during the season. All races in which points are scored count towards a racer’s season total.

Points standings will be maintained and updated by the Points Committee Chairman (or their chosen assistant) and posted on the NYSSRA-Nordic website www.nyssranordic.org

Awards for the overall champion of each age class (male and female U16, U18, U20, Senior, M1, M2…M12) will be presented following the NYSSRA-Nordic Champions Cup race. Awards will be based on total accumulated points throughout the current NYSSRA-Nordic racing season.  In addition, additional skiers who score in the top 30 overall points (red group) will also receive an award, regardless of age-class.

How do racers score points? – Any racer who completes a NYSSRA-Nordic sanctioned race scores points for that race.

Do you get points for finishing the race? – Yes. NYSSRA-Nordic awards 10 points to each NYSSRA member who finishes a sanctioned race.

Do you get points for doing well in your age group? – Yes. NYSSRA-Nordic will also award age-group points, 20 pts for first, 16 for 2nd, etc…

Do you get points for doing well overall? – Yes. NYSSRA-Nordic will award overall place points (10 for 1st overall, 9 for 2nd, … 1 for 10th overall). So, you score points three ways in each race.

What about the Empire State Winter Games? – Yes, NYSSRA-Nordic points will be awarded during the ESWG events. These races are part of the NYSSRA-Nordic series

What about the NYSSRA-Nordic Champions Cup Race? – NYSSRA-Nordic will award double points for this race. It is also a mandatory event to finish for anyone who wishes to be eligible for the season-ending age group awards.

When are Points Series awards given? – The season-long points series awards will be presented after the completion of the Champions Cup race. Racers must finish that race in order to be eligible for awards.

Points are updated as event results are sent in by race organizers.  The points lists are hosted by Google Drive and will automatically update as they are added.  Look at the tabs to see the individual races that have been scored.

The Points Committee tries to be as accurate as possible in calculating NYSSRA Points, but is dependent on information collected by race organizers.  Occasionally, mistakes in spelling of names or mis-imported age classes crop up and may affect your points totals.  We strive to be as accurate as possible, so if you see a discrepancy, do not hesitate to contact the NYSSRA points committee chairman, Eric Seyse

NOTE: ONLY ACTIVE NYSSRA MEMBERS ARE DISPLAYED ON THESE LISTS (non-members may score points, but if you wish to be eligible for end-of-season awards, register as an active NYSSRA Member)