This weekend was a smaller one for NYSSRA racing, but with some bigger consequences. For the first time in 2020 (or this part of 2019 for that matter) NYSSRA Nordic racers ventured out to onto natural snow. The whole season had been at Gore. We are grateful for their snow, and hospitality, and glad to be able to branch out a bit.

Garnett Hill and Saratoga biathlon held 4 races! Smaller clubs have had a tough time competing with the big numbers from Rochester and NYSEF. However while big teams were away, tearing up the man made snow at Craftsbury, the smaller clubs skied fast laps over thin cover and boosted their team scores substantially.

The results were striking.

HURT got on top of the podium for the first time this year (followed by GHN-ADK Vauhti, and Peru tying for Silver). 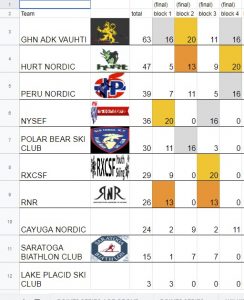 This will make things more interesting at both the ESWG Tournado, and the simultaneous final JNQ’s out in Rochester.- Sign up soon, registration closes early.- And don’t forget more fun kids races in old forge.

Points will be cumulative for each day, so teams will get credit for their racers in Placid and in Rochester. After that only the Tourathon and Simultaneous Hurtathon on February 8th, and GHN Classic on February 16th remain before Champs back at Saratoga Biathlon February 22-3rd.

For now, artificial snow will be back on the menu for a bit (with Section 9 racing at Maple Ski ridge tonight, on last season’s Championship relay loop). Enjoy the snow where you can find it.