A bunch of big races have just wrapped up. In the end, NYSSRA regulars took some of the top spots:
First of NYSPHSAA championships at GORE: Mattern and Schulz did just as well at the Championships as they have in the NYSSRA series races  this year. 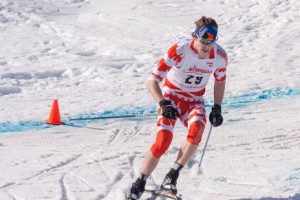 Jacob Alberga stays in control on the middle downhill turn in spite of some ankle deep churned up snow (their team finished 4th allowing section 7 to bump section 2 from their top spot after Monday’s distance race).

Off in WI, GHN-ADK Vauhti racer Matti Torniainen won his age group, Men 75-79, first out of 10, in the 55k American Birkebeiner Classic last weekend. This builds on his top age group finish in this years Winona tourathon where he cracked top 10 overall (behind his son in first place) 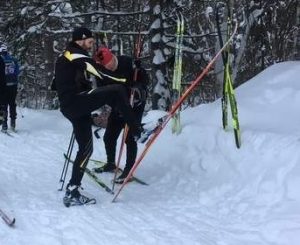 -At left The Torniainen’s get ready for 50 Km’s at Winona, no shortage of winter there!

The East selected their team for NCAA’s, 2 former NYSSRA all stars: Adam Luban, and Nina Armstrong are headed off to CO for NCAA’s- Good luck from NYSSRA Nordic.

This has not been an easy season. Races were cancelled due to lack of snow, then bitter cold and later deep fresh snow followed by ran challenged race organizers. Those who made the most of this season were rewarded with great results and some unique race experiences. Enjoy the snow while it lasts, then get ready for next season.