I think I can safely say without the following spoiler warning… That it was inspiring to Watch Jessie Diggins and Kikkan Randall win Olympic gold. Their hard work and dedication paid off on the world stage. Their success raised the profile of our sport. I can’t wait to see what they (and our other dedicated skiers and biathletes) do next. 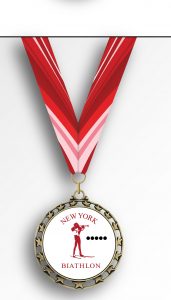 Locally we had some (minor) miracles too. We were faced with 65′ weather and quite a bit of rain. Rather than inflating bike tires or getting out paddles, Curt Schreiner worked his magic and made a beautiful course for this years Mini Marathon. An excellent pair of races were pulled off with no need for rock skis. A dedicated crowd followed his lead and kept their season going. Lots of yellow wax, flouros, and Structure were key during Saturday’s races. Biathlon went off on fairly firm trail at 10. Brian Halligan shot 80 % and won decisively. Gabriella Frittelli took gold in the women’s race. Calm winds made the shooting range more manageable, keeping traffic light in the penalty loop.results here

By afternoon the trail had warmed up. There was a thin (1/2″-2″) mashed potato like layer over the very firm crust base of the trail. Jrs skied 8K, U18, and Grand masters skied 12K, and the rest skied 20K. Chris Yarsevich led out for the first 3K. After a quiet first lap, Dave Paarlberg-Kvam, Eric Seyse, and Brian Halligan moved away on the front. As the race wore on Dave skipped the feed zone, and carried on at his steady pace. Lap after lap it paid off paid off (by a victory margin similar to the Olympic 30K Sunday). Dave claimed his first NYSSRA Championship gold. Brian stayed in a safe second place, while Seyse faded into serious bonk territory-and slid off the podium. Chris Rose overcame slow skis and took Bronze. Deb Nordyke took yet another Gold medal in the Women’s mini marathon. She was followed by Gabriella Frittelli, and Amanda Zullo

Champs is worth double points for teams, so 40 for the win, 32 for second, 26 for third and so on. Due to the indefinite postponement of the 2018 Club relays, This years Championship came down to 1 important race.

This years Team competition was closer than usual before the race: HURT began the season by winning the annual membership race which gave them a 13 point lead on Vauhti, and 17 on PERU. Over the course of the season much of the lead remained, leaving HURT with multiple paths to victory.

Thanks to a strong showing with some age class victories, and more NYSSRA member competitors representing their club at the event: GHN-ADK Vauhti squeaked out a narrow victory Club points series.-Just tab through to see Wilkinson Cup,Red Group and age group Points standings 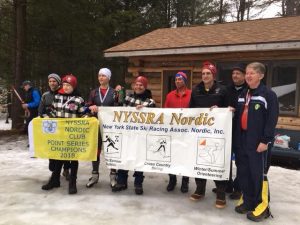 Thank you to all racers who were a part of this NYSSRA season. If we receive sufficient snow, Club Championship relays will be held at Saratoga at a later date. In the meantime, parents can watch their kids race:register for Bill Koch. Biathletes can race in Osceola, and High School students will be competing in Eastern High School Champs, U16 Champs, and Jr. Nationals. After that if the weather holds NYSSRA’s first NORDIX race is on the Calendar!