The Conditions could not have been better for a ski race this weekend. Skiers who came out to Saratoga biathlon found crips trials and perfect skiing weather. We had attendees from all corners of the state (and beyond the state). However NYSSRA Champs was competing with the State meet, and the Berkie, so some regular faces were absent from the results. GHN-ADK founder Matt Torniainen beat HURT Founder Dave P-K at the Berkie. ost of NYSSRA’s fastest Junior racers took teh day off and spectated, or made the trip out to Rochester.

RNR’s Jason Hettenbaugh returned to claim this year’s title as the NYSSRA Nordic Champion. He led from the gun and broke contact after lap 1. Over the following 3 laps Hettenbaugh put 7 minutes between him and his closest competitor. Peru and GHN ADK Vauhtis skiers played cat and mouse on the course. Drafting strategically, and surging by on the rolling trails. GHN-ADK’s Eric Seyse was just fast enough to hold off a hard charging Chris Rose from Peru Nordic. They started the day nearly tied in the season points competition (Seyse 364, Rose 354, Truppelli  352). Had Truppelli raced the short course, he would likely have snagged the overall title. All 3 raced the full Mini Marathon and when the Dust Settled, Seyse led by a 4 points.

In the Women’s Race Saratoga Biathlon’s: Deb Nordyke challenged for the mens podium, on her way to a gold medal in the Women’s race, followed By Peru’s Amanda Zullo. 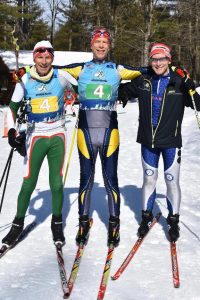 Fianna Halloran GHN-ADK Vauhti skied the fastest U16 time on the single lap U16 course. This was more than just an easy warm up for states. She expanded on her top score (367) in the NYSSRA point series for the second year running, this year beating all the men in her race too! Based on  her time she could have challenged in the 11K had she chossn to ski more laps. Watch out for her next season. Her first place finish also allowed her to rise to the top of the podium in this year’s Wilkinson Cup, snatching the title from her teammate Maddie Ralyeah who was resting for states. Fianna is clearly the MVP of her club.

The relays gave teams one last shot to climb in the standings. Home course Saratoga biathletes decimated their competition winning the mixed and men’s divisions. Glenville held on to the overall lead. Peru stayed ahead of HURT based on their strong performance Saturday.

Enjoy the snow while it lasts 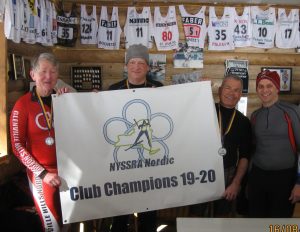