In what is likely the final race of the season Katrin Schreiner and Alex Fragomeni took top honors at the 2018 Easter race at Saratoga biathlon. Both led from the gun and never looked back in their respective 10K, and 5K skate distance races. Competition was tight. 6 racers were part of a train on lap 1 :5th -11th  were separated by just  seconds. this shaped up for a photo finish between NYSSRA veterans Greg Stevens and Eli Walker. 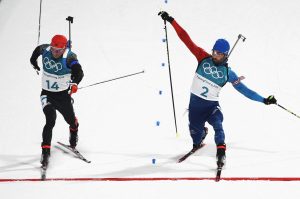 -(At left: An artist’s rendering of Walker getting popped by Stevens)- we will post photos at a later date if they are submitted.

After a short break watching BKYSL kids ski for Easter candy, it was back to racing.  Jacob Alberga and Deb Schreiner partnered up with the morning’s winners to dominate the men’s and women’s team sprint races.- Deb also put in a blazing fast first lap in the team sprint.

The team sprint format kept racers on their toes. At least one racer botched the tag off when his partner flew in on the tails of the first place team. This added to the exciting atmosphere, and kept spectators guessing until the race was over.