TOP JUNIORS IN THE COUNTRY 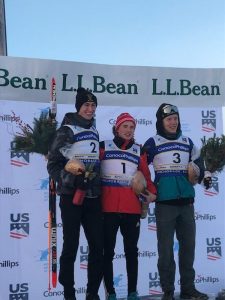 Lake Placid, N.Y. – January 8, 2018: Karl and Scott Schulz of Lake Placid, N.Y. traveled to Anchorage, Alaska to compete in U.S. Nationals in hopes of making to the next level. These races determine roster spots on the FIS Junior World Championships and U18 Scandinavian Cup teams! Some of the top competitors of the week are headed to the Olympics. It is easy to say that the field was stacked with talent. The Schulz boys went to Alaska with a goal and accomplished it in all three events: the 15K freestyle race which took place on Wednesday, January 3, the freestyle sprint race on Thursday, January 4 and ended with the 10k classic race on Sunday, January 7.

On Wednesday, January 3 during the 15K freestyle, Karl placed 11th for Juniors and Scott was 10th for U18’s.

Moving into Thursday, the Schulz boys are known for their sprinting. They certainly impressed all their fans that were online streaming the 3-minutes sprints from the warmth of their home. Karl placed 2nd for Juniors and Scott placed 3rd for U18’s.

Finally, the week ended with the 10K classic event

Based on their results, the Schulz boys qualified for the international trips they traveled to Alaska for! Karl will be traveling to Goms, Switzerland to race in the World Junior Championships at the end of January. Karl had to qualify in the top 6 of all U18’s and U20’s. Scott will be traveling to Vuokatti, Finland during the same time to race in the U18 Scandinavian Championships. For Scott’s trip, he needed to qualify in the top 6 of all U18’s. Each athlete raced three races and the best two of each athlete were scored to name the teams.

Head NYSEF Cross Country Ski Coach, Shane MacDowell said, “long story short, the boys are super-fast and will be representing the USA and NYSEF on the international stage.” When asked Coach MacDowell how are you sharing the excitement on the plane ride home, he commented, “not many young people can say they are the top athletes in the country in their sport …I am so happy for them…they stepped up.” We hope the success of last week makes the long trip back to Lake Placid more manageable. We are confident they will be greeted with hugs and high-fives for days.

Detailed results and highlights from the event, can be found here.