Winter is here, and what better way to celebrate than coming out for some classical racing on natural snow. {A big thank you to the venues who made snow for NYSSRA racers to get in some early season KMs}- More on that later.

A 5K Classic Race at Osceola Tug Hill XC Ski Center. Likewise, Skiers will travel from all corners or the state for sweet trail and sweeter pie.

Snow accumulates on a table of coveted pies at Osceola Tug Hill XC Center (2016- this years pies will be fresh!). 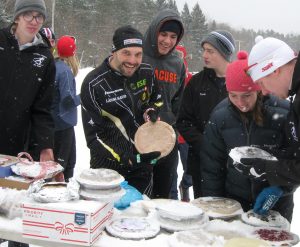 Age group winners pick pies. Matt Torniainen goes for the apple crumb pie, or was it the Tollhouse pie? – (2016 photo- watch out on the trail racers are hungry for victory!)

There will be Ski Orienteering at Lapland Lake Sunday.- It is a great time to give the sport a try.

The trails were packed at Gore Ski Bowl,  (racers ranging in age of U4 to M9 skied a combined 2 thousand KM’s). Results are up on this site, but the short version is: Schultz Allison, and Greene are really really fast! The Gore Crew created an Bridged loop with man-made snow. The course was challenging, and very fast. It is great for racers to get snow time in early in the season. Somehow the man-made snow was a bit less abrasive this year, and both klister and hard wax kicked without much dragging.

GHN ADK vauhti had to cancel the GHN Fun Do this year- Maple ski ridge will be open for Alpine skiing,  so we will not be able to take advantage of their ample snow coverage during regular racing hours. If snow becomes scarce and a there is a weekend without other races, we will make use of their facility,which is open for Nordic on Monday and Tuesday 4-7 pm, and will be available for a race before or after their alpine hours on the weekend.

Wax up and get on the trail.