NYSSRA Nordic competition will start this weekend, sign up early and watch the weather so you can get the most time out on the snow.

NYSSRA Nordic racers have the privilege of competing against some truly excellent athletes. Kids who got their start on local trails have gone on to pursue Olympic Gold. One of the Latest Olympic hopefuls is Maddie Phaneuf. 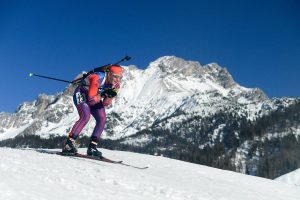 How to qualify for the 2018 Winter Olympics

Hello Town of Webb! My name is Maddie Phaneuf and I’m a 2013 graduate of the Town of Webb school. For the past few years, after skiing for the Polar Bear ski club and our High School Nordic ski team, I’ve been competing internationally in the sport of biathlon as a member of the US National Team. I’m very lucky to be able to call Old Forge my home because the support I’ve gotten from my community and from my local sponsors has been incredible. Without that support, I don’t think I’d have been able to focus so much on achieving my goals. And I’ve got a major goal I’m still hoping to achieve.

If you haven’t heard, this coming year is extra special because of the Olympic Winter Games being hosted in South Korea! My parents and family have been getting this question a lot – Is Maddie competing in the Olympics? When will we know? The answer is, I won’t know if I’ll make the Olympic team until mid-January.

So, I bet you’re wondering how does one qualify for the US Olympic team in biathlon? Selection to the 2018 US Olympic Biathlon Women’s Team will happen in three phases, plus a final discretionary nomination (the men have the same process).

Phase 1 – You can qualify for the team based on how you did in the 2016-17 World Cup season, or the World Championships. Susan Dunklee of Barton, Vermont had a great season last year, capped off by a second place finish in a World Cup race – so Susan already qualifies for the Olympic Team. By the way, Lowell Bailey (former Polar Bear and Old Forge resident) has pre-qualified for the Men’s Olympic Team based on his historic victory at last season’s World Championships.

Phase 2 – You can qualify for the team based on how you might do at 2017-18 World Cup races that are happening right now in Europe. We have a team of three ladies over at the World Cup right now. I didn’t race well enough this summer and failed to make the team this year, so I can’t qualify via Phase 2. At least one (and maybe two) of the ladies racing on the World Cup team will qualify for the Olympic Team.

Phase 3 – This is where I come in. One or two spots on the Olympic Team will be determined by a series of races that will happen in Europe in January. But first, in order to make the group that will race in Europe, I’ll have to qualify by performing well in a series of races happening in Minnesota in mid-December. Once that hurdle is overcome, I’ll head over to the IBU Cup races in Europe, where the skier or skiers who perform the best will be chosen for the team. 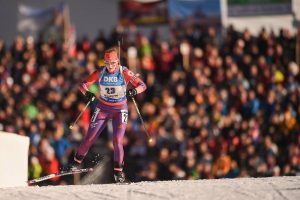 Discretionary selection – Four of the five spots on the team will be selected based on racing and results. The final Olympic Biathlon team has five spots, and the final spot will be filled by US Biathlon based on their discretion. Usually they select the person who was next best in the racing, but sometimes they’ll use their discretion to select someone who was ill or injured during the racing, and didn’t have a chance to ski their best.

So what does all this mean for me? I’m currently training on snow in Canmore, Alberta, Canada and I’ll travel to Minnesota in early December for the first set of qualifying races. I’ll compete against many other US biathletes (my friends and training partners) in order to claim a spot on the IBU Cup team. Then, if everything goes as planned, I’ll fly over to Europe in January and those IBU Cup races will be my Olympic qualifying races! So, first I need to race well in Minnesota and then I need to have some great races in Europe if I want to see myself at the 2018 Winter Olympics.

I plan to trust the process, go with the flow, and try not to stress too much. I’ve learned that focusing too much on an outcome can mess with your process, and that goes for anything in life! I’m excited to see how this season develops for me. If I happen to find myself in South Korea this February, I’d be very proud to represent the amazing community that helped me get there!

I’d like give special thanks to my local sponsors: Blizzard Manufacturing, Water Safari, Adirondack Accents, DiOrio’s Supermarket, Ozzie’s Coffee Bar, Helmer’s Fuel, and Adirondack Homes and Real Estate. Many of these local companies have been supporting me for a few years, and I am very thankful. I’m also extremely grateful to every person who has ever donated towards my biathlon career – there are too many people to list. I wouldn’t be able to pursue my dreams if it weren’t for you! Wish me luck!